The Met Gala is arguably the hottest date in the social calendar for many a designer and celebrity and it’s a day to really push the boat out and play dress up.  Here’s a bit of background for you; the fundraising gala marks the opening of the Costume Institute’s annual fashion exhibit and the exhibition theme sets the tone for gala with each guest expected to match their attire to the theme with as much imagination and flair as they see fit.  The theme for 2015?  China: Through the Looking Glass.  Now for me, this conjured up visions of Romantic Exoticism by Alexander McQueen and interpretations of Asian culture through adventurous fashion, however in reality, the Met Gala red carpet never quite works like that.  Sure, there are the diehards, (SJP I’m looking at you) who use the event as an outlet to showcase their creativity 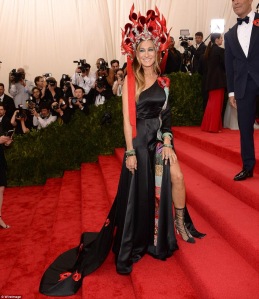 but then on the flip side there are those who pay no heed to the theme and turn up wearing whatever they like (Elizabeth Banks, this is mainly aimed at you).

Then in the middle are those who try, but shoot way wide of the mark (Aw bless, Chloe Sevingny, and Chloe Mortez, this one’s for you, but you know, kudos for trying). 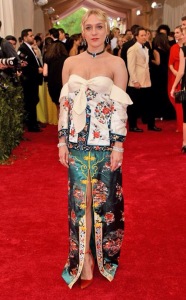 The 2015 exhibition itself is beautiful, with pieces from Alexander McQueen and Guo Pei, it’s an extravaganza of culturally inspired masterpieces and the presentation is exquisite.  With an amazing golden Guo Pei full-skirted frock taking centre-stage – the same designer who worked tirelessly for 20 long months on THAT golden cape worn by Rihanna to the gala.  Speaking of THAT cape, Pei said it’s crafted from “loads of gold thread and fox fur” and that it weighs a whopping 55lbs, first shown as part of the designers 2010 collection, Pei said that it was never meant to be anything other than a runway piece and that in real life, there’s no-one other than Rihanna who could pull it off and man, is she right. 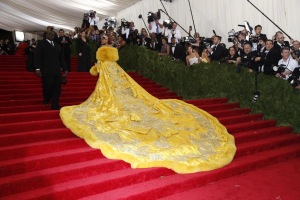 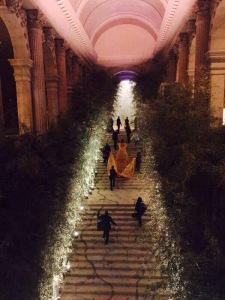 No matter what your opinion on the frocks (or pantsuits, hello Cara Delevingne), the Met Gala Red Carpet is always fascinating, you get the good, the bad and the downright ugly all under one roof and it’s a real spectacle.  It’s the one event in the fashion calendar where the focus is not on the designer but on the celebrity wearing the designer and it’s a major player when it comes to inspiring the High Street.  A savvy Philip green dressed a selection of celebs for the event and made limited quantities of their gowns available for purchase on the evening of the Met Gala priced between £195 – £285, all of which sold out in minutes.  Well played Phil, well played.

There were some Uh-mazing gowns this year; Kim Kardashian wore a stunning white Peter Dundas ‘First’ for Roberto Cavalli with feather train, with more than a nod a frock worn to the same gala by Beyonce in previous years.  Beyonce wore her very own version of the ‘Naked Dress’, very pretty indeed Mrs Carter but definitely not on theme.  Poppy Delevingne and Rosie Huntington Whitely both looked gorgeous but again, wide of the theme, a feeble nod to the theme with hairstyling doesn’t count ladies, it’s the Met Gala, you gotta go all in.

The weirdest things to happen on the night were, a weird social media phenomenon claiming that Jason Derulo had a spectacular fall down the Met Gala staircase, however the pictures flooding social media platforms were actually of a prankster known as The Fall Guy at the 2011 Cannes Film Festival.   But even this wasn’t a match for the monstrosity of an outfit worn by Olivia Wilde (seriously, did she let her baby pick it?!)

Now for the best bit, my top picks.  My favourite outfits from the evening, and there are some wildcards in there, are based on those who went all in for the theme without being culturally inappropriate, and obviously, looked amazing.  love them or hate them, top of the polls for me were Joan Smalls and Zendaya, I usually feel that Zendaya either smashes it or gets it so wrong and this was one of those nights where she killed it on every level, making a triumphant return from those racial slurs, she’s proven not only that she has style, but that she has strength and I’m all about that.  Joan Smalls just looked phenomenal, you’ll remember the purple lipstick from last year, well this time her body is sheathed in that very shade and she looks interstellar.  Karolina Kurkova served up an ace in a shorter red dress too.

I loved Fan BingBing at the Met gala, elegant and poised but then everyday’s a fairytale when you’re Fan BingBing, and FKA Twigs, yes it had a penis on it but there’s no denying, the girl got game.  Emily Blunt did a cute (but not in a “Wow” way) take on the theme but left me wanting more.  Bailey baldwin showed she’d crossed over to the dark side with a newly brunette ‘do and looked amazing decked out in Topshop Unique and YSL Tribute Heels. 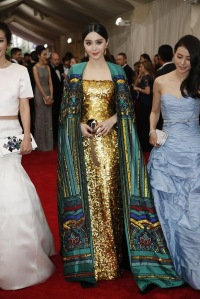 In other news, Kendall wore custom Calvin Klein, beautiful shade on her but the frock was just a bit ‘meh’, beautiful but I guess I just expected more.  Lily Collins looked adorable in a look straight off the Chanel runway and Katy Perry and Madonna arrived with Jeremy Scott in Graffiti dresses from the FW15 collection which looked like a plan put together at the final minute. 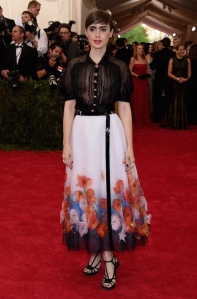 So there we have it, the good the bad and the seriously, WTF?! from the Met Gala 2015.  Selfies and social media were banned from the event but the usual social misfits managed to wrangle a few in, see if you can spot them in the slideshow below.  And of course, since the famous Oscar’s Selfie, no fabulous event is complete without the obligatory group shot…. 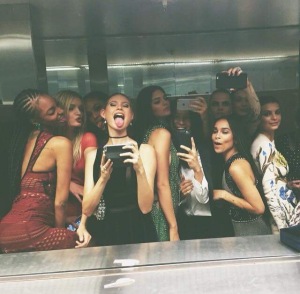