I was recently invited to take a VIP hard hat tour of the brand new, as yet unfinished, Crowne Plaza Hotel on Forth Street Newcastle.  The upmarket hotel is set to open its doors to the public later this year and is completely different to anything else currently available in the City.  A product of years of market research, the Crowne Plaza Newcastle is geared up for corporate clients, city breakers, day spa members and casual diners and has incorporated the needs of each type of client into its intensive planning and two year build project.

“We’re pushing all the time, trying to move the standards in the city forwards and matching the strengths in terms of location and brand.”

In the last few months the development has really started to take shape, no longer just a shell, the glass fronted hotel is a real showstopper and the planned landscaping for the front area will really highlight the trendy Stephenson Quarter as a destination.  I donned my work boots, hard hat and hi-vis jacket for a behind the scenes tour of the huge project.

The people behind the Crowne Plaza were adamant that during the design phase, they weren’t going to use a hotel designer for the interior planning.  They’re remained resolute and together with Simon Spiteri (Carluccio’s) onboard as interior designer,  they’ve created a real boutique hotel feel, despite the enormity of the towering Crowne Plaza – something very different for the corporate client.  Sourcing sustainable materials, and using modern finishing techniques, they’ve come up with a cool colour palette of steel blues and greys for the hotels 260+ bedrooms and suites using glass and exposed polished concrete pillars to up the fashion ante.  Room furniture will be walnut coloured with chrome accents bringing a modern vibe to the hotel.

The hotel will feature a huge glass atrium with an enormous crystal chandelier taking centre stage and each communal floor area will have a glass balcony overlooking this area adding a dimension of light and space.  Walking into the space as it is now, and seeing the projected images of the finished area, there’s no doubt that the Crowne Plaza will have the Wow Factor, and it’s less hotel-like than you might imagine, which is exactly what they’ve gone for.

The hotel is treating its main functional areas almost as separate businesses, meaning that they aren’t bound to keeping the same decor and theme in each zone of the hotel.  Breaking the mould, The Crowne Plaza Newcastle will have its very own Gin Bar at street level where residents and customers alike can choose from an initial selection of over 30 varieties of gin.  The Gin Bar will strip back cocktail drinking to its very core and focus on the Martini, a traditional cocktail of pure alcohol which requires great skill to get right, Food and Beverage Manager Paul Walker told me that a huge amount of research and planning has gone into getting The Gin Bar on point; from the distilling of their very own craft gin, right through to the New York paperboy style uniforms.  Even the furniture has been changed at the last-minute because it was felt the vibe wasn’t quite right.  The mood boards for The Gin Bar show a darker, slinkier, more relaxed lounge environment and just looking at the sumptuous colour schemes is getting me excited…..

Hawthorns, the in-house restaurant, will serve “good, wholesome, healthy food” to residents and diners alike.  The dining area has been well thought out and aims to integrate large corporate groups, single diners, couples and mobile office workers with a variety of different height seating areas, booths and benches maximising space and light.  It’s a more responsive environment which shuns the traditions of other restaurants allowing customers to select their own table and seats based on their needs.

The corporate and conferencing facilities in the Crowne Plaza are second to none, with a huge central conference room acting as a hub, it’s been planned with serious attention to detail.  from the acoustic ceiling and targeted lighting, to the coloured wash lighting which can be altered to fit a specific company’s requirements, every little detail has been considered at the planning stage.  The Crowne Plaza is banking on corporate business and it shows, in a big way.  With a number of function rooms, conference suites and break-out areas available, it’s clear that they’ve set their sights on being the best in their field.

Hotel car parking will be designated in the multi-storey carpark currently in development just behind the hotel, although the carpark operator is as yet unknown, the Crowne Plaza have reserved bays for the use of hotel and spa guests only.  The hotel will also benefit from super fast free WiFi Boost meaning that no matter where you are in the hotel there will be no black spots, in addition, each bedroom will also have infinity charging points which charge your gadgets fast and continue to do so after your key card is removed from its dock.  neat, huh?!  Rooms have been kitted out with the best quality bedding and there will designated Quiet Zones throughout the hotel for light sleepers, the Crowne Plaza have really gone all out to make sure your stay is a comfortable one. 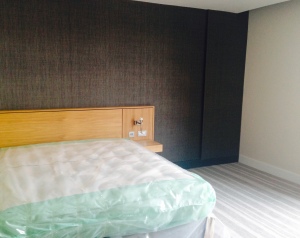 The Crowne Plaza suites, although currently just bare shells, look set to be a real draw for the hotel.  Situated on a corner of the structure looking out over Newcastle Central Station and beyond, the rooms are fully soundproof and feature floor to ceiling glass windows allowing undisturbed views of the city.  Our tour guide told us that since taking over the operation of the station, Network Rail have announced plans to landscape the area of the train station overlooked by the hotel and there are plans underway to build either a bridge or a tunnel to link hotel residents to the train station directly, fancy right?! 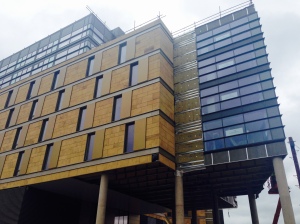 Down in the basement area, like many hotels, The Crowne Plaza Newcastle will house a spa area, named The Mineral Room in homage to the site’s heritage, equipped with a 10 metre pool, whirlpool, steamroom and sauna, as well as three large treatment rooms equipped to provide the latest state of the art beauty treatments.  There will also be a gym with the usual standard machines and free weights, but with the added benefit of 1:1 personal training for guests giving a far more bespoke service.

The pool area feels very upmarket; it’s dark and decadent and benefits from super high windows at street level which act as a source of natural light without giving pedestrians a view into the spa.  The spa is a welcome addition to the hotel, and something the City has been clamouring for as it’s been starved of an upmarket hotel with really great spa facilities for so long.  For non hotel residents, there will be a membership programme for the hotel gym and pool with an as yet unknown monthly rate, which will also give members access to exclusive discounts across the hotel, Hawthorns and The Gin Bar.

There are some real nice touches in the Crowne Plaza Newcastle, the green credentials for example, there are two seed grass roof areas which provide a pretty view to guests on the Northern side of the hotel with South facing windows.  Also, the hotel have tried to stay true to North East heritage when planning the development, the menu will be Northern with food sourced in the North and the house gin will also be distilled in the North.

As the prospective opening date of September 2015 draws closer, it’s easy to see, even at this early stage, that the hotel is going to be a crowd pleaser.  With the Stephenson Quarter development gathering pace and new phases unveiled it could be that this becomes the new area to see and be seen, there’s talk of a micro-brewery popping up in the old JT Dove building and with the Royal Mail building now up for development who knows what could crop up next on this über trendy site.  A new residential development of executive apartments is in the pipeline further down Forth Banks which will bring a whole new clientele into the mix for the brand new Stephenson Quarter.

I don’t know about you but I’m excited about this, it brings jobs to our glorious city and adds another pillar to our amazing skyline as well as opening up a whole new zone of the city which was relatively unexplored……….until now.  So if you’re around the Forth Street area on the Quayside approach, stop, take a look at the new Crowne Plaza building, it’s well on the way to looking like it does in the plans and you might just be looking at the next big thing in Newcastle when The Gin Bar opens its doors in August.

There’s just one thing I’m a little disappointed about….. I didn’t get to keep the hard hat. 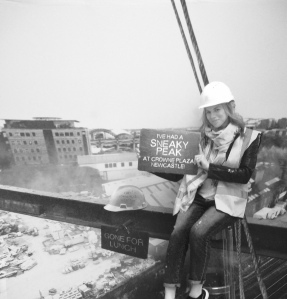