I was invited backstage before the show to really get an idea of the thought behind the show and was very interested to hear that Holly thinks of her show as a view into her world.  This is far more than a twenty minute runway show, this is an experience, and it begins when the models are cast.  Holly wanted the models skin to almost drip with luminescence and health and in order to achieve this models were gifted with beauty devices from leading home beauty device brand; Silk’n.  These included the Glide hair removal, Silhouette contouring and Sonic Clean Plus devices, all of which contributed to that flawless glow the models had on the runway.

“Fashion and beauty have the same aspiration, to make women look and feel beautiful” says Holly, “My SS15 collection is set off by illuminating skin which is smooth and soft to the touch, thanks to Silk’n revolutionary products”

models hair was kept simple in low slung ponytails with added weaves for extra length, I spoke to Hair Stylists Loui Ferri and Mags about the look and they said that it was all about a sleek look so that the focus would be on the models “glow” 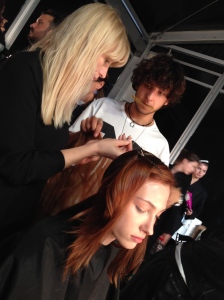 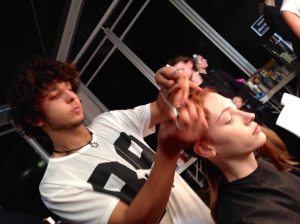 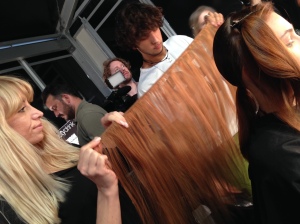 Holly hails from Edinburgh and is known for her striking graphic prints.  Her SS15 runway show theme was alluded to with the printed show invite and the show itself did not disappoint.  Nestled in the Courtyard showspace at London Fashion Week hub, Somerset House, a white reflective runway was concealed by yellow plastic as we took our seats.

The FROW was a hotbed for fashion editors, bloggers, celebrities and fashion lovers all eager for a first look at the collection dubbed “an ode to sun-worship, folk art and free expression”

The creations were decorated in folkloric magic but grounded in the precision of Modernism.  True to form, Holly sent models cascading down the runway in her signature monochrome panelled with crystal and laser cut components and bonded patent strapping.

Models wore sunglasses from Holly’s own collection; Holly Fulton for Cutler and Gross and powered down the runway to the beats of Jonjo Jury.

I swear my heart skipped a beat when the graphic printed silk coat appeared on the runway and my eyes seemed to naturally filter out everything else for a moment, a thing of rare beauty and craftsmanship, and something that screams Holly Fulton to anyone within shouting distance.

After a gorgeous finale with colours so sharp they looked like they had been processed with a Chrome filter, Holly made a brief appearance on the runway stopping only to wave to the crowd before disappearing again.  One thing is for sure though, the Great British High-street will be awash with tributes to this collection come February 2015 and we’ll all be back in graphic print with perspex detailing, strapping and accessories.